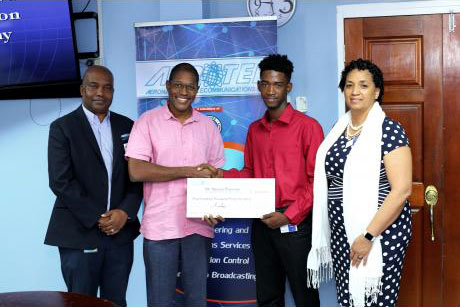 Aeronautical Telecommunications Limited (Aerotel) has awarded another UTech student with theAerotel Scholarship for electrical and computing engineering degree students for the period 2018-2020.The company, which is a subsidiary of the Jamaica Civil Aviation Authority, is awarding the scholarshipfor a fourth biennial cycle in what it says is a move to support future engineers along their journey torealizing their dreams and to bolster the development of the profession.

At the Aerotel Scholarship Award ceremony held recently, Chairman of the Board of Aerotel, Mr. MarcRamsay stated that the scholarship provides an opportunity for access to the relevant education and jobexperience which are necessary factors for success in the industry. He said, “For Aerotel, it’s importantthat we’re not just at the end of the process, providing the services, but we want to also be closer to thebeginning where persons can get the opportunity to train and have scholarships so they can become thebest in their field.”

This year’s awardee, Navion Plummer says, “I never thought in a million years I would be here todayreceiving a scholarship. It has been a rocky road for me but I’ve put in the hard work and I’m here today.I’m just an ordinary country boy who has bigger dreams than his mother’s pockets.” Plummer who untilnow relied on the Student Loans Bureau to finance the first two years of his time at UTech says he isgrateful for the scholarship and he is eager to soak up the exposure that the scholarship will afford him.

Meanwhile, Dean of the Faculty of Engineering and Computing at UTech, Nilza Aples in her address toguests at the ceremony lauded the continuation of the scholarship. She says that engineering studentsare critical to the development of the nation as they drive innovation but the students are struggling tocomplete their degrees. “The opportunity of the scholarship is something that we value the most,” shesaid. She added that the company is not only investing in Mr. Plummer but also investing in the future.

Aples noted that after graduation, many persons are seeking opportunities and jobs elsewhere. She saysthe school is grateful to Aerotel for, “Offering the opportunity for our graduates to stay in Jamaica andmake the changes in Jamaica.”

Aerotel scholarship awardees are guaranteed full time employment with the company after they’vesuccessfully completed their degrees. All three recipients of the award since its inception work at thecompany.